There is nothing more vital than the balanced temperament of a dog.  This contributes to years of pleasure hunting over a confident, biddable and cooperative dog as well as peace of mind allowing your dog to interact freely with dogs and humans alike.  Some of the tests used by Broken Bow Kennels were developed as long ago as the l930’s for dogs bred to become Guide Dogs for the blind.  Others are utilized by the US military in improving confidence and cooperation.  In the 1950’s, studies on puppies were done to determine how quickly they learned.  Later, in the early 60’s more tests were developed to determine if pups could be tested for dominance and submission.  These tests determined that it was indeed possible to predict future behavioral traits of adult dogs.  Utilizing the Volhard Puppy Aptitude Test and the Bio Sensor program utilized by the US military it is possible to both produce better neurologically balanced dogs as well as place them in homes where they can excel.

The tests are as follows:

In the US military canine program, a method was developed that has served Broken Bow Kennels very well in producing puppies that are bold and have a very balanced temperament.  In an effort to improve the performance of dogs used for military purposes, a program called “Bio Sensor” was developed.  Based on years of research, the military learned that early neurological stimulation exercises could have important and lasting effects.  The “Bio Sensor” program was adopted in order to give the dog a superior advantage. Its development utilized six exercises which were designed to stimulate the neurological system.  They are:

Tactile stimulation – holding the pup in one hand, the handler gently stimulates (tickles) the pup between the toes on any one foot using a Q-tip.

Head held erect – using both hands, the pup is held perpendicular to the ground, (straight up), so that its head is directly above its tail.

Head pointed down – holding the pup firmly with both hands the head is reversed and is pointed downward so that it is pointing towards the ground.

Supine position – hold the pup so that its back is resting in the palm of both hands with its muzzle facing the ceiling.

Thermal stimulation—use a damp towel that has been cooled in a refrigerator for at least five minutes. Place the pup on the towel, feet down. Do not restrain it from moving.

These five exercises will produce neurological stimulations, which would not naturally occur during the first weeks of life. At Broken Bow Kennels, experience has shown that sometimes pups will resist these exercises, others will appear unconcerned, but all of these exercises impact the neurological system by kicking it into action earlier than would be normally expected, the result being an increased capacity that later will help to make the difference in its performance.  The five benefits most notable are: Improved cardio-vascular performance, stronger heartbeat, better adrenal performance, more tolerance to stress and greater resistance to disease.  In tests of learning, stimulated pups are found to be more active and are more exploratory than their non-stimulated littermates over which they are generally dominant in competitive situations. 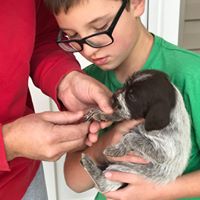