Shelby-Broken Bow's "She'll Be A Classic"

Shelby is the daughter of CH VC Griffe D’Autumne Mr. Brown and Broken Bow’s Lil Devil NA1 UT3.  She is the perfect balance of sweetheart and machine!  As a breeder of top performing Wirehaired Pointing Griffons, Broken Bow Kennels strives to constantly improve their lines and the breed.  By pairing old world performance and the stunning balance of Mr. Brown that goal has been meet once again.  Shelby is a striking, high drive hunting dog.  As an example of the Wirehaired Pointing Griffon, Shelby stands above the rest.  She has a high prey drive for upland birds, waterfowl and furred game, while maintaining a balance of cooperation and spirit that one can only hope for.  Shelby covers ground at an impressive pace and will work 25 miles day after day.

Shelby has been tested through the North American Versatile Hunting Dog Association and turned in a near perfect score for her Natural Ability test.  She is now in training for her Utility Test.  This test involves situations that closely mimic real hunting situations.  A dog is held to the highest standard in both upland and water work.  During the water phase of the test, a dog is required to search independently for a crippled duck, remain steady and quiet in the duck blind, and deliver all retrieves to hand.  While running in the field, the judges focus on a dog’s steadiness on point through the shot and fall of the bird.  Also of critical importance in the ability of a versatile hunting dog is the drive and determination to track wounded and lost game, whether that is a duck, pheasant, rabbit or deer.  The Utility Test evaluates a dog’s willingness to locate game and deliver that game to hand or bring the handler to the animal.  Throughout all the stages of the test, a dog is observed to determine how well it works with its handler.  There is no enjoyment in hunting over a dog that is simply hunting for itself.  This is where Shelby stands apart!  From the first time a bumper was thrown for Shelby, she has been a natural retriever.  She could not get enough of chasing anything thrown, bringing it back and begging for it to be thrown again.  Shelby loves the water too and is a strong swimmer.  She proves this over and over again with her long days hunting ducks and geese on the Snake River.  This, along with her desire to please and work with her handler, has made her training for the Utility test a pleasure.

Shelby has shown a great desire to be with her people, being protective of the youngest of children she encounters.  Whenever the kids are out and about, you can count on Shelby to be right there watching out for anything that is out of place.  Shelby has even dragged kids out of the water by their diaper during family time at the beach.

As a hunting Griffon, Shelby has seen few that were her equal.  She has successfully hunted all of Idaho’s upland game birds.  She has hunted the endless plains of the American breadbasket chasing roosters and traveled to the brutal canyons of the southwest in pursuit of quail.  Shelby is the embodiment of the intelligence Wirehaired Pointing Griffons should possess.  As the hunting season wears on and birds grow savvy of hunters, Shelby perfectly adjusts her tactics to ensure successful days in the field.  More than once Shelby has demonstrated this keen skill as she has pinned coveys of Chukar or Hungarian Partridge from more than 30 yards away in sparse cover on impossibly steep slopes. 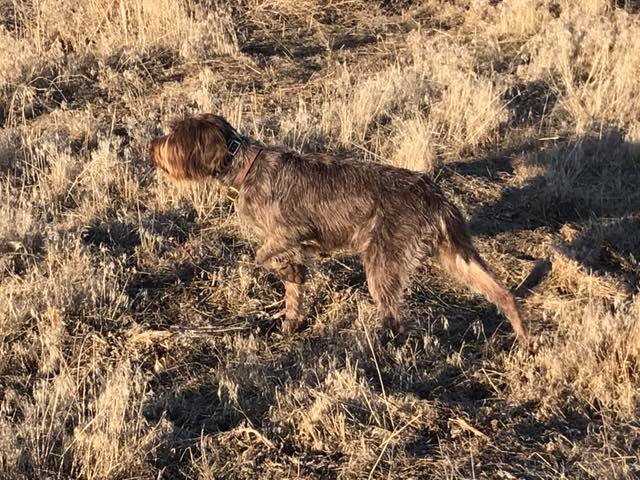 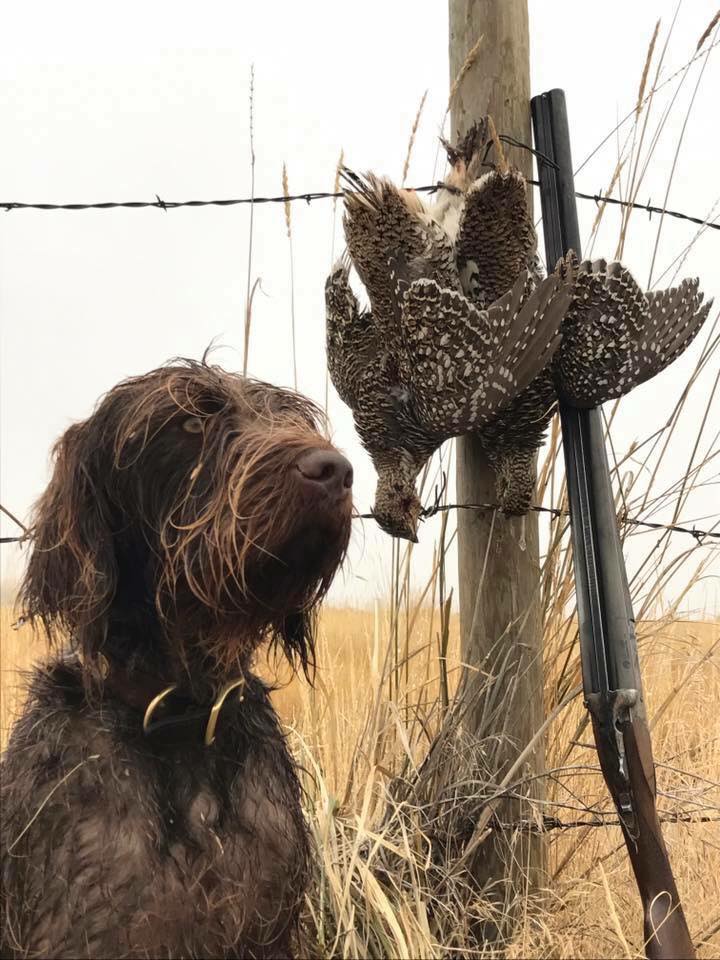 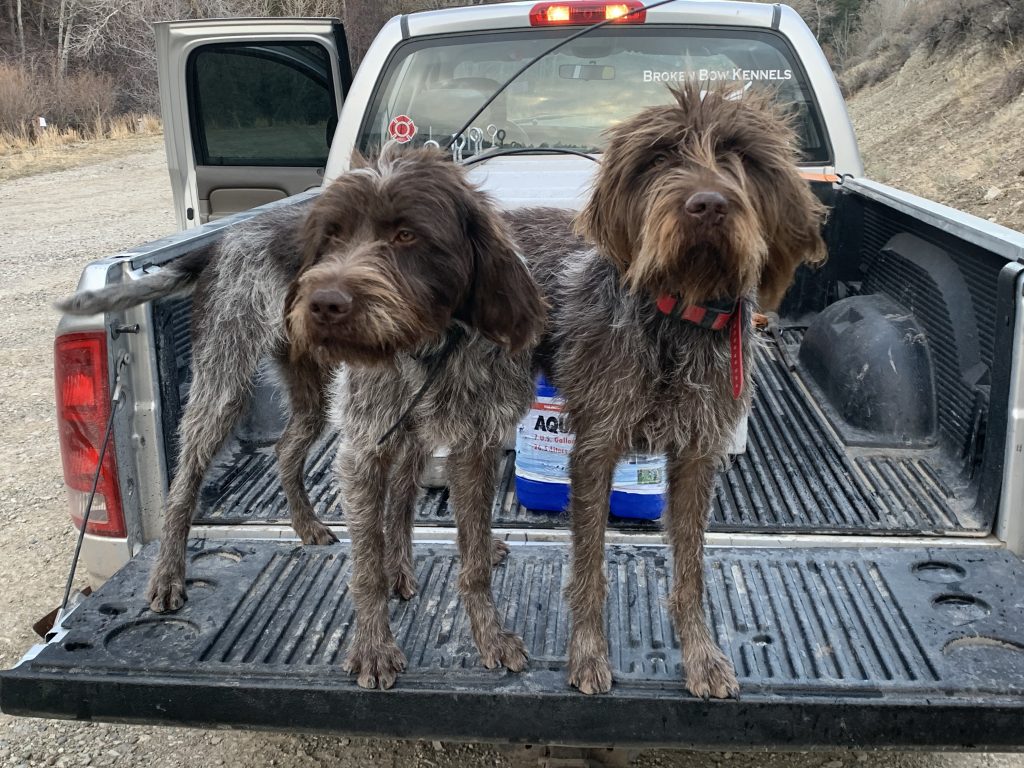 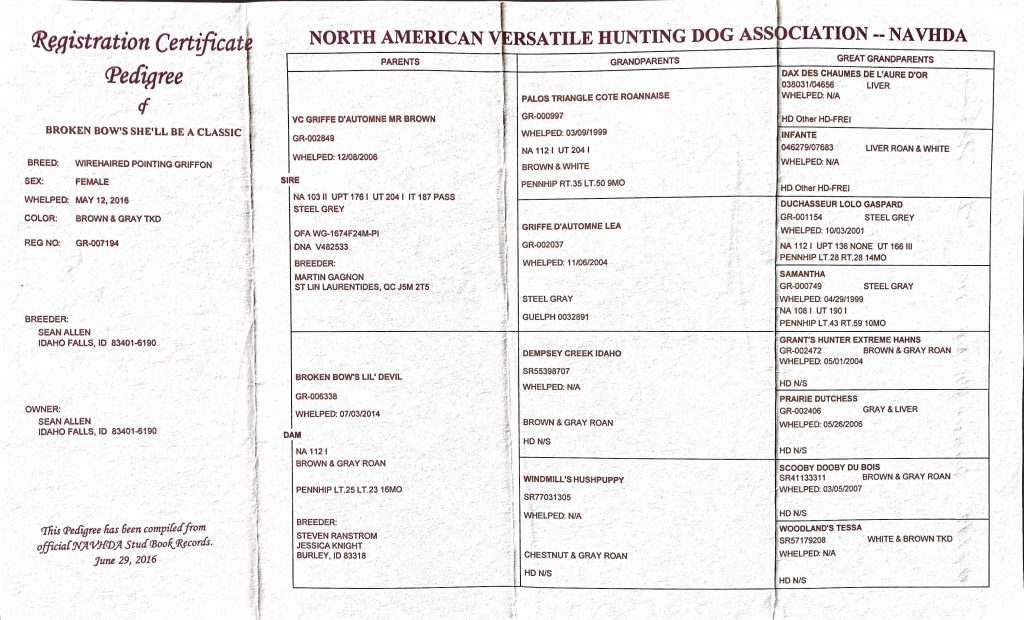